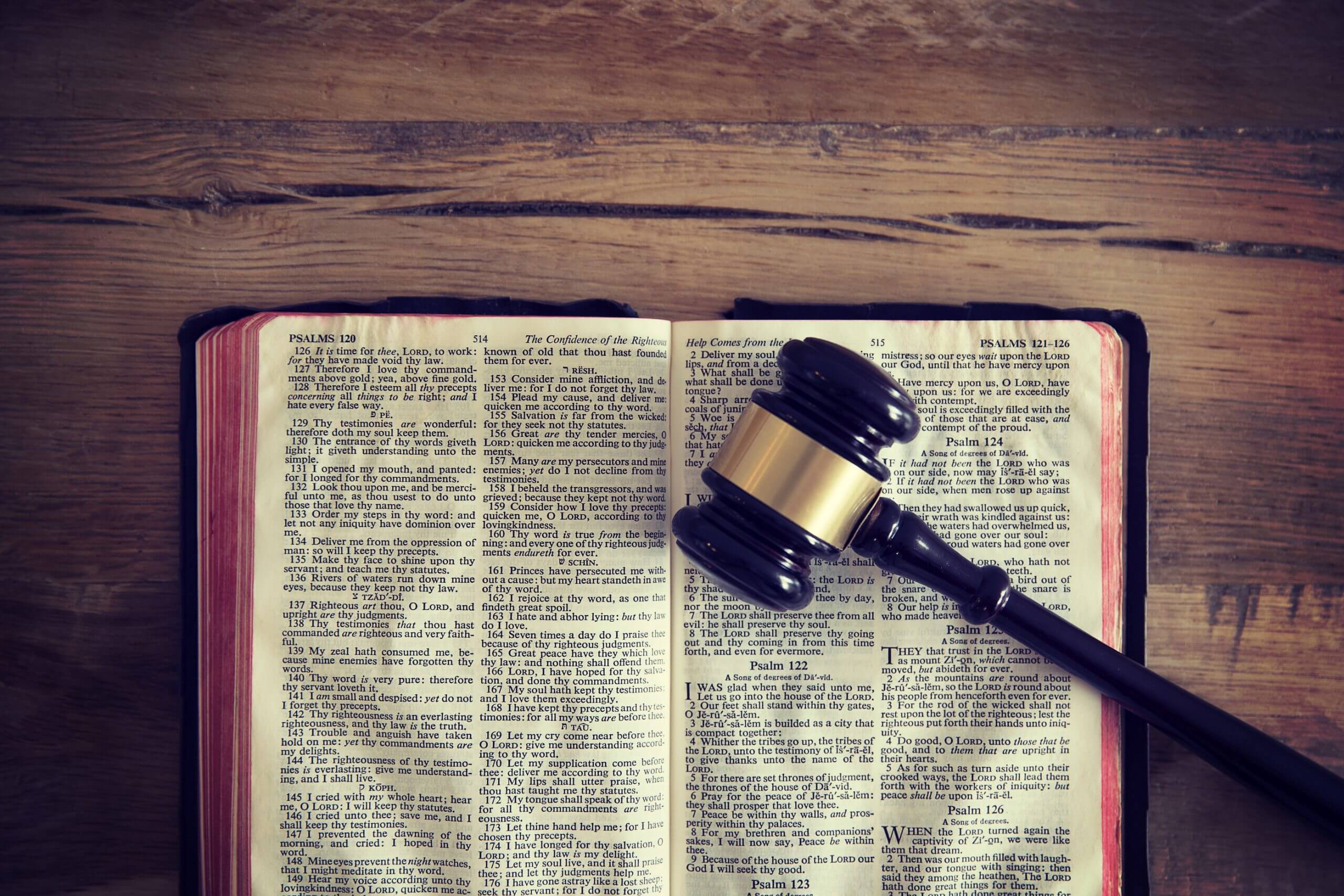 Who is to condemn? Christ Jesus is the one who died – more than that, who was raised – who is at the right hand of God, who indeed is interceding for us. – Romans 8:34

Charges have been brought against you. But God has justified you. Justification is the theme of Romans. It is a forensic term that means “to declare righteous.” Romans 3:23 sates: “for all have sinned and fall short of the glory of God.” How can sinners be declared righteous before God? Romans 4:4-5 reads: “Now to the one who works, his wages are not counted as a gift but as his due. And to the one who does not work but believes in him who justifies the ungodly, his faith is counted as righteousness.” God does not justify the self-righteous who work for salvation. God justifies the ungodly who trust the blood and righteousness of Christ.

Romans 8:1 declares, “There is therefore now no condemnation for those who are in Christ Jesus.” Verse 34 rightly asks: “Who is to condemn?” Romans 2:16 states “God judges the secrets of men by Christ Jesus.” But Jesus will not judge those who trust him for salvation. This is the message of Romans 8:34: When you trust Jesus Christ for salvation, your case is closed forever!

Here are four reasons your case is closed if your trust Jesus Christ for salvation.

Praise God for the righteous life, wise teachings, and mighty miracles of Jesus. But they would not have availed anything for our salvation if they had not culminated with his death. Verse 34 says, “Who is to condemn? Christ Jesus is the one who died.” Jesus died on the cross. Crucifixion was considered “a stumbling block to the Jews and folly to the Gentiles” (1 Corinthians 1:23). But this scandalous death accomplished a glorious purpose. Jesus was not crucified for being a political nuisance to the Romans or a religious nonconformist to the Jews. The death of Jesus was a substitutionary atonement for sin.

The prophet wrote, “Surely he has borne our griefs and carried our sorrows; yet we esteemed him stricken, smitten by God, and afflicted. But he was pierced for our transgressions; he was crushed for our iniquities; upon him was the chastisement that brought us peace, and with his wounds we are healed. All we like sheep have gone astray; we have turned – every one – to his own way; and the Lord has laid on him the iniquity of us all” (Isaiah 53:4-6). 2 Corinthians 5:21 says, “For our sake he made him to be sin who knew no sin, so that in him we might become the righteousness of God.”

Sinners are saved by faith in the finished work of Christ at the cross. The blood of Jesus paid it all. Yet Paul gives a second reason why the believer’s case is closed forever. The one who died on the cross rose from the dead. Romans 4:25 says he “was delivered up for our trespasses and raised for our justification.”

How do we know Jesus was the Son of God? How do we know he truly lived a sinless life? How do we know his death was a substitutionary atonement for our sins? We know the meaning of his death because of the fact of his resurrection. In 1 Corinthians 15:3-4, Paul writes: “For I delivered to you as of first importance what I also received; that Christ died for our sins in accordance with the Scriptures, that he was buried, that he was raised on the third day in accordance with the Scriptures.” Jesus died on the cross for our sins. Jesus was buried in a tomb after his death. Jesus was raised from the dead on the third day.

Verse 34 says, “Who is to condemn? Christ Jesus is the one who died – more than that, who was raised – who is at the right hand of God.” The “right hand of God” is the place of divine favor, honor, and authority. The crucified Savior was not only raised from death to life. He was raised from earth to heaven. Forty days after his resurrection, as Jesus was talking his disciples, he was lifted up out of their sight on the clouds. Acts 1:11 reports that angels spoke to the stunned disciples: “Men of Galilee, why do you stand looking into heaven? This Jesus, who was taken up from you into heaven, will come in the same way as you saw him go into heaven.”

Ephesians 1:20-21 says God “raised him from the dead and seated him at his right hand in the heavenly places, far above all rule and authority and power and dominion and above every name that is named, not only in this age but also in the one to come.” The one who died on the cross and rose from the dead is now seated at the right hand of God. Psalm 110:1 reads: The Lord said to my Lord: “Sit at my right hand, until I make your enemies your footstool.” The Christ of the empty tomb is the Christ of the occupied throne. Paul declares: “Therefore God has highly exalted him and bestowed on him the name that is above every name, so that at the name of Jesus every knee should bow, in heaven and on earth and under the earth, and every tongue confess that Jesus Christ is Lord, to the glory of God the Father” (Philippians 2:9-11).

Romans 8:26 says: “Likewise the Spirit himself helps us in our weakness. For we do not know what to pray for as we ought, but the Spirit himself intercedes for us with groanings too deep for words.” The Holy Spirit is in our hearts making intercession for us. The Lord Jesus Christ is in heaven making intercession for us. Hebrews 7:25 says, “Consequently, he is able to save to the uttermost those who draw near to God through him, since he always lives to make intercession for them.” The mediation of Christ is not the basis of our salvation. We are saved by his death at the cross and his resurrection from the dead. The mediation of Christ is the basis of our security. The believer is eternally secure because the crucified Savior and risen Lord is at the right hand of God interceding for us, not condemning us.

Verse 34 says, “Who is to condemn? Christ Jesus is the one who died – more than that, who was raised – who is at the right hand of God, who indeed is interceding for us.” Verse 34 does not say Jesus died for us, was raised for us, or is at the right hand for us. But it explicitly states that Jesus is making intercession for us. The Lord Jesus Christ intercedes to provide everything we need from God the Father on our journey from earth to glory. Roman 8:32 says: “He who did not spare his own Son but gave him up for us all, how will he not also with him graciously give us all things?” You cannot receive all things until you receive the Son. But your case is closed forever when you trust the Lord Jesus Christ for salvation. John wrote: “My little children, I am writing these things to you so that you may not sin. But if anyone does sin, we have an advocate with the Father, Jesus Christ the righteous” (1 John 2:1).