In Tribute to Pastor Mike Rodgers

It was Memorial Day weekend, 2008. It was my first visit to the Shiloh Metropolitan Baptist Church of Jacksonville.

The weekend started that Friday evening with a dinner reception in the church’s dining room. Some people sat smoking me over. To others, I was just another face. That’s what happens when a church is looking for a pastor.

I felt like I knew him before I met him that night. I had heard him preach several times on the Internet. He was preaching through Exodus on Wednesday nights. And I remember the sermons were very encouraging. Mike Rodgers was the same way in person. Very encouraging. That was Mike, without exception. Even when he was saying something difficult to me, I somehow felt encouraged.

Admittedly, I did not initially know how to take Mike’s sense of humor. But I soon discovered that this was just Mike. He found humor in everything. He was constantly smiling. For instance, more than 1,600 people voted for me to pastor of Shiloh. 41 people voted for neither candidate. Mike always joked that those 41 votes were for him!

The first Sunday I preached at Shiloh, I attended Mike’s marriage class. I would later discover that it was the largest Bible Study Fellowship in the church. They were studying the seven churches of Revelation. Mike addresses the text. Then he gave the implications of the text for couples. When he opened the floor for discussion, he got some tough questions. But he responded to each with loving but firm advice, encouraging the couple to faithfulness. His dear wife, Cheryl, also encouraged the couples. After decades of marriage, they were an inseparable and potent team. 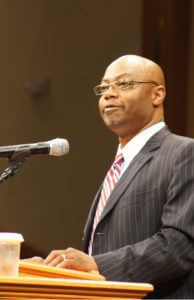 Mike helped me find good burger joints in Jacksonville. I would use the meals as opportunities to get advice about leading the church. And he would never join in my negativity, no matter how bad I perceived a situation to be. He encouraged me to be faithful, keep preaching, love the congregation, do what is right, and to trust God.

I remember one of the darkest periods of my brief pastorate at Shiloh. I was flying home from preaching in Los Angeles. I had a layover in Miami. My phone seemed to ring as soon as I turned it on. It was Crystal. Mike wanted to meet me when I landed in Jacksonville. When I landed late that night, Pastor Mike and Deacon Q. Davis were there. They warned me that things were about to get worse! They did not know what was going to happen. But they did not want me to walk into something blindly. Then they encouraged me to hang in there and prayed for me. Mike and I would always joke about that infamous “Airport Meeting.”

Sure enough, things would come to a head with a big church meeting. And it was Mike Rodgers who stood up for me. But I do not think he viewed himself as doing something for me. He was just doing what he believed was right. That was Mike Rodgers.

The Shiloh Metropolitan Baptist Church will meet today to celebrate the life of this great man of God. The Lord suddenly snatched him from us a week ago today. It has been a difficult week for us. And I have dreaded this morning. But as I woke up this morning, my heart was joyful. This is the way Mike would want it. He would not want us to be sad for him. He would want a celebration. Indeed, we have much to celebrate.

Mike Rodgers faithfully served the Shiloh family for almost twenty years. He taught the married Couples Class. He preached the Men’s Prayer Breakfast. He baptized new converts. He counseled those wanting to get married and those wanting to get out of their marriages. He preached the word. He led worship. He performed weddings. He preached funerals. He encouraged the new, young preachers of the church. He advised ministry leaders. He attended meetings, just to show his support. You would think that Mike was a part of our fulltime pastoral staff, the way he tirelessly served the church. Whatever he could do to serve, Mike was there.

Mike was one of a kind. Our church will miss him. My family will miss. I will miss him sitting behind me each Sunday, offering whatever encouragement he felt I needed.

Mike Leroy Rodgers would have been 59-years-old next month. He and “Mother” Cheryl have been married for 41 years. They have two children and grandchildren. He has been a member of Shiloh since 1994. He was from Oklahoma. And proud of it!  He served his country in the Navy. He was an avid runner. My senior by two decades, Mike constantly encouraged me to get in shape. He was a practical joker. He was a lover of people. He was a follower of Jesus Christ. He was a servant of the Word. He was a friend to the hurting. He was Barnabas – a Son of Encouragement.

Mike Rodgers was a man of God.

And I heared a voice from heaven saying, “Write this: Blessed are the dead who die int he Lord from now on.” “Blessed indeed,” says the SPirit, “that they may rest from the labors, for their deeds follow them!” – Revelation 14:13

Shiloh members, feel free to share your tributes to Pastor Mike Rodgers in the comments section.