How the Lord Rewards his Laborers 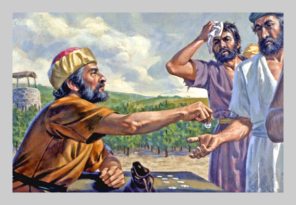 But he replied to one of them, “Friend I am doing you no wrong. Did you not agree with me for a denarius? Take what belongs to you and go. I choose to give to this last worker as I give to you. Am I not allowed to do what I choose with what belongs to me. Or do you begrudge me my generosity?” – Matthew 20:13-15

In Matthew 20:1-16, Jesus tells the Parable of the Landowner: A landowner went to the marketplace, cut a deal with some eager looking guys for a denarius, and put them to work. It was 6 AM. More workers were needed. So he hired more guys. This time, however, he did not negotiate terms. He just promised to treat them right at the end of the day. It was 9 AM. This routine repeated at noon, 3 PM, and 5 PM – one hour before the workday ended.

Because field workers were poor, and landowners may take advantage of them, the law required laborers be paid at the end of each workday (Leviticus 19:13; Deuteronomy 24:14-15).  The landowner complied, but mischievously instructed his foreman, “Pay the latecomers first and the early birds last.”

The 5 pm guys were paid first: one denarius. The 9 am, noon, and 3 pm guys also received a denarius. Then the 6 am workers were paid the same as everyone else. They were incredulous. But the landowner asked, “Did I violate our contract? Am I allowed to do as I wish with my money? Are you jealous because I was kind to someone else?” These rhetorical questions teach us how the Lord rewards those who work for him.

The Lord is Sovereign.

The landowner asked a complaining employee, “Am I not allowed to do what I choose with what belongs to me?” (Matthew 20:15). Every denarius distributed that day belonged to the landowner. Because it belonged to him, he had the right to as he chose with his money. David says, “The earth is the Lord’s and the fullness therefore, the world and those who dwell therein” (Psalm 24:1). God owns it all! And God has the right to do whatever he chooses with what belongs to him.

Psalms 115:3 declares, “Our God is in the heavens; he does all that he pleases.” We recoil from this great truth, when God does as he pleases, and it is not what pleases us. But we must not to complain against God when life does not turn as we calculated. You may have borne the heaviest part of the burden and worked the hottest part of the day. But God blesses whom he wills, when he wills, where he wills, as he wills, and long as he wills. And he does not have to ask your permission about who to show favor to.

The Lord is Just.

The landowner said to a grumbling early bird, “Friend, I am doing you no wrong. Did you not agree with me for a denarius?” (Matthew 20:13). The landowner had not done wrong. He gave what he agreed to give. The early bird’s problem was not that the landowner broke their agreement, but that he would not renegotiate. He did not complain because the landowner was unfair, but because he was more than fair. Indeed, the Lord is a just God. But, truth be told, you do not really want God to be fair.

When things don’t go our way, we tend to act as if owes us something. But you do not want God to prove his justice by giving you what you really deserve! That was the problem with early birds. When they saw the generosity of the landowner, they did not want him to give them what they deserved. It is not wise to try to deal with God by contract. You always lose in the end. Just work hard and trust he will treat your right!

The Lord is Generous.

The landowner asked, “Is your eye envious because I am generous?” (Matthew, NASB). The landowner did not mistreat the early birds. Their issue was that he was generous to latecomers, whom they deemed unworthy. They had a problem with the fact that he was gracious to those who they did not think deserved it. But that is the scandalous nature of amazing grace.

God gives generously because he can do what he chooses to do. God gives generously in kindness to the least, last, lost, and left-out. God gives generously to throw off religious bookkeepers who are preoccupied with what their pay is going to be. As you review your time cards, God brings ragamuffin latecomers to the front of the line at the pay window. You should respond to every duty by saying, “It’s a privilege to be a part of God’s work.” There is much work to be done. God can use anyone, even you! And he will treat you right, at the end of the day.

Are you grateful for the privilege to serve the Lord? Are you willing to let the Lord handle is own business? Are you trusting the Lord will treat you right at the of the day?