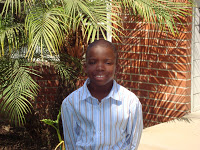 Crystal and I finally told Trey and Natalie that Shiloh Church would be voting on a new pastor. We also told them that we needed to pray hard for Shiloh, because I was one of two names that would be submitted to the church for consideration. They were both speechless. So I encouraged them to say something. H.B. spoke up, asking, “Daddy, you said we have to pray. But can we pray what we want to pray?” “Sure,” I replied, not really knowing where this was going. He leaped into the air cheering and instructing his little sister to vote for “the other guy.”

We were on our way to dinner. And Crystal and I were both on the phone, discussing the fact that Shiloh had just elected me to be its new pastor. When I finished my call, H.B. asked me about the vote. I answered him. He ordered me to tell them no. Then he cried for several hours. Literally. And for the next several weeks, whenever he heard the words “Jacksonville” or “Shiloh” he would cry.

I was truly worried about him and how this potential transition would impact him. I wasn’t really worried about Natalie. She only only wanted to know how many people we would be able to take with us and whether Pastor Letson would still be here when we arrived. In contrast, H.B. is very shy and nervous around people. And he just began to start opening up. We didn’t want a possible move to be too hard on him.

Once it was settled that we were moving, Trey began to slowly adjust. We first noticed it when he started going to be every night wearing the “All-Male Round-Up” t-shirt Deacon Bobby gave him. Later, we started noticing that he would begin his questions or statements with the words, “When we move to Jacksonville…”

Today, my family has been here for two weeks. And today is Trey’s ninth birthday. He is at school, where he tells me that the whole class is his new friends. And this evening we will all attend Midweek Worship Service. But our plan is to make a weekend of it. He wants to go bowling, because we went bowling last year on his  birthday and he beat me the last game (I blame it on the bumpers he had). He has invited two new friends he has made at the church. And he even invited one of the associate pastors to come. I praise God for how my little boy is adjusting to our new reality. And I hope that he will remember his first birthday in Jacksonville as a special one.

I praise God to see over these days how my little boy is growing up. I love him and am so very proud of him. He knows that I pray that God would call him to preach the word. He’s not sure about that, but he doesn’t want to hurt my feelings. You see, he wants to be a profession wrestler. Don’t ask. And he keeps telling me he can do both, promising that he will only wrestle on Saturdays so that he can preach on Sundays. I don’t argue with him. I just continue to pray that he would grow as Jesus grew – in wisdom, and stature, and favor with God and men (Luke 2:52). And I pray that God would be glorified in his life.