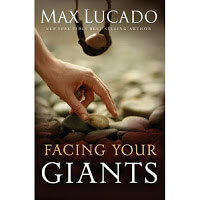 Young David was just minding his business. Doing his duty. Obeying his father’s orders to take food to his brothers who were soldiers and to find out how the battle with the Philistines was going. But David got more than information. He got involved. With great jealousy for God’s reputation, David faced Goliath when none of Israel’s army dared to accept the giant Philistine’s challenge. Not his big brothers. Not the best of Israel’s fighting men. Not King Saul himself. How could a little boy like that ever hope to defeat a giant like that? Simple. Or is it? You decide: David was able to defeat the giant Goliath because he focused on God while every one else focused on the giant.

This simple, difficult point is the message of Max Lucado’s, Facing Your Giants, in which Lucado crystallizes the message of David’s life with this powerful thought: “Some note the absence of miracles in his story. No Red Sea openings, chariots flaming, or dead Lazaruses walking. No miracles. But there is one. David is one. A rough-edged walking wonder of God who neon-lights this truth: Focus on giants – you stumble. Focus on God – your giants tumble.” (Page 9)

Lucado, who has served as the Senior Pastor of the Oak Hills Church in San Antonio for more than two decades, is also a prolific writer who has earned a reputation for penning Christian devotional books that are clear, practical, and encouraging. And beyond being helpful in pointing readers to God; Lucado’s writing makes for good reading. Period. His creative way of teaching scripture with compelling storytelling, stirring word pictures, and memorable illustrations usually makes it hard to put a Max Lucado book down. And he does not fail to produce his trademark encouraging and enjoyable work in this study of the life of David.

Lucado begins with David’s epic battle with Goliath, in which the young man defeated the seasoned warrior by focusing his confidence on the God who is greater than all. And Lucado challenges the reader to believe that our giants – sin, fear, debt, grief, loss, or whatever it may be – can also be defeated when we focus on how big our God is, rather than how big the giant is. Then Lucado masterfully applies this principle to the ongoing saga of David. Goliath was not the last giant David had to fight. There were other giants – both literal and spiritual – that confronted David as he ascended to the throne, established the nation of Israel, and serve God’s purposes in his generation. And the standard stands in each situation. When David focused on God, there was great victory. When David did not focus on God, there was miserable defeat. And you will find that this is inevitably true in your life, as well. If you will keep the eyes of your faith focused on our God who has never lost a battle, no giant will be able to stand against you. I warmly commend Facing Your Giants as our July Book of the Month. Read it. Heed its call to focus on God. And watch the giants begin to tumble in your life to the glory of God!