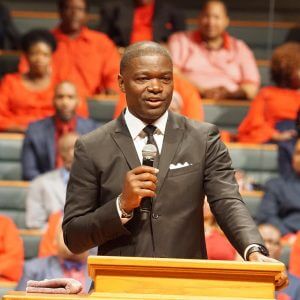 Clinton McFarland and I tried to figure out how long we have known each other. It has been about twenty years. However, we simply concluded we were still young preachers way back then.

Clinton McFarland is the founding pastor of the Grace Baptist Church in Atlanta, which he planted almost five years ago. He is also a much -sought after preacher who ministers the word of God in cities across the country.

From his first congregation in a small town in Mississippi to a planted church in the metropolis in Atlanta, the Lord is using Pastor Clinton McFarland in a great way.

Clinton McFarland grew up with a passion to sing, not preach. After his call to ministry, his gift to sing has followed him. In 2018, McFarland returned to the studio and released his latest musical project, entitled, Trusting God. Check it out!

I recently had a conversation with Pastor Clinton McFarland about his life and ministry. Enjoy!