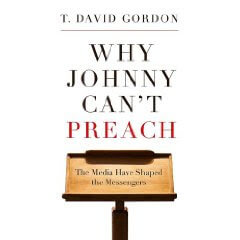 On and between flights today, I read T. David Gordon’s little book, Why Johnny Can’t Preach (P&R Publishers). And it was wonderfully disturbing. Playing off the titles of several classics, Why Johnny Can’t Read and Why Johnny Can’t Write, Gordon argues that media (in the general sense) has shaped the pulpit. Consequently, Gordon argues, many pulpits in America are filled by men who cannot preach. That is, many pastors do not know how to read texts carefully or how to communicate clearly or distinguish between the significant and the insignificant. And the pew is malnourished because of it.

I was challenged by this book. I did not agree with everything I read. Neither will you. But there is so much here that just cannot be denied and needs to be addressed by those of us who have the grave task of heralding the fitness and competence of Jesus Christ  as Savior and Lord.

Personally, reading this book has challenged me all the more to take my preaching seriously and strive to be a faithful, Christ-centered, expository preacher.

Gordon ends with good news: Johnny can learn to preach! He must simply work harder at reading the text and writing himself clear and focusing on eternal matters of creation, the Fall, and redemption. And, of course, the Lord must give Johnny utterance, and boldness to speak, so that he can say what he ought to say and make known the mystery of the gospel.

Following are a few quotes I highlighted as I was reading:

If the hearer’s duty in listening to a sermon is to be willing to submit one’s will to God’s will, then one can only do this if the preacher does his duty of demonstrating that what he is saying is God’s will. (p. 18)

Bad preaching is insufferably long, even if the chronological length is brief. (p. 30)

I realized then that sermon length is not measured in minutes; it is measured in minutes-beyond-interest, in the amount of time the minister continues to preach after he has lost the interest of his hearers (assuming he ever kindled it in the first place). (p. 31)

Anyone who reads normally assumes that you need to read a minimum of three to five books just to get a general introduction to a subject. (p. 54)

I would love to challenge the how-to preacher to preach a sermon on “How the Leopard Can Change His Spots,” since, biblically, this is as easily done as a sinner’s changing his ways. (p. 82)

The particular blindness of the culture warrior is that he permits himself to think God is pleased by coerced behavior; by requiring people to say “one nation, under God” even if they do not yet believe in God (which strikes me as an instance of taking the Lord’s name in vain). (p. 87)

If theocracy didn’t work in Israel, where God divinely instituted it, why do people insist on believing it will work in places where God manifestly has not instituted it. (p. 88)