Weak Sermons Need Music To Prop Them Up 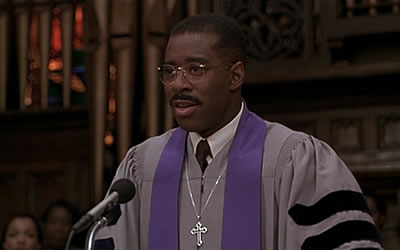 Have you seen The Preacher’s Wife? It is a 1996 movie starring Denzel Washington and the late Whitney Houston.

I went to see this movie when it came out in theaters. But I checked out during an early scene.

The pastor was preaching his sermon. It was not going well. The preacher’s wife – Whitney Houston – who was also the music director, decide to save the day.

The preacher made another point. His wife then led the choir in a musical response. It happened several times, until he gave her the look.

I felt that way recently, preaching away from home. Throughout the message, the pianist inserted his own impromptu soundtrack to my sermon. I could not keep my train of thought. And it felt like the congregation responded to his piano riffs more than the actual content of the message.

I tried to give him the look. But he was too busy in his own world to pay attention. So his musical interludes continued.

Before I could catch myself, I turned to him and said, “Let me finish my lesson.”

A serious preacher will work hard on his sermon. The sermon may be well received. Or not. That’s the way it goes. Ultimately, we preach to an audience of One. We are heralds for the King. We are stewards of the gospel.

Faithfulness to the sacred charge of preaching requires that a preacher have the courage to live and die with the message he has been given to declare. If the Lord doesn’t rescue the sermon from dying, you definitely don’t want the organist to do it!

I am sure the musician did not mean any harm. He was only trying to help.

It is some preacher’s style to have a pianist or organist accompany them throughout the sermon. I am not casting judgment on that. And I am not making a case against celebration in preaching. But it is one thing for musicians to help the preacher whoop at the end. It is another thing to help him preach the sermon.

Weak preaching needs music to prop it up. The gospel makes it’s own music. Let the message stand on its own.