I was hosting a revival meeting. Our guest speaker was the late Rev. Jerome Kirby. One night after service, Rev. Kirby said he wanted to hear E.K. Bailey preach at Mt. Moriah the next day.

I had heard the name before. But I did not know anything about E.K. Bailey. My guest said, “Shame on you!”

My guest would not answer any of my questions about Dr. Bailey’s minstry. He told me my questions would be answered tomorrow.

The next, Dr. Bailey preached to almost a full house. At lunchtime! 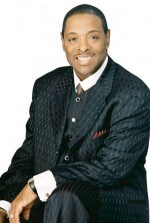 Bailey preached from Joshua 8. The message was entitled, “Reclaiming Lost Ground.” I will never forget it. In fact, I can probably preach the sermon from memory to this day!

As a sinner, I was both challenged and comforted by the message.

As a preacher, I was blown away! The message was homiletically enticing. Dr. Bailey had a presence about him. His voice was made for preaching. He commanded the room. But what struck me the most was that he simply explained the text.

I left that service determined to do what I had just heard.

By divine conspiracy, I was being turned toward expository preaching. My father was a textual preacher. As a boy, I was more of a narrative preacher. I just tried to tell the story of the text. But after my father’s death, the Lord rapidly and repeatedly introduced me to expository preachers through tapes and books.

By the time I heard Dr. Bailey, Pastors Melvin Wade, R.A. Williams, and Kenneth Ulmer – Los Angeles preachers who were expository in their preaching – had already made a strong impression on me.

But hearing Dr. E.K. Bailey sealed the deal for me. I became a student of expository preaching that day.

In the succeeding years, I heard Dr. Bailey preach at every opportunity. I hoarded tapes of his messages from around the country. He became one of my homiletical heroes. He still is.

Then I was exposed to the E.K. Bailey Preaching Conference.

I was only able to attend once. But I sent my associate preachers every year. I sent them for their benefit. I also sent them to bring me back the tapes/CDs!

The year I went was life changing. I sat in classes that were Bible-based, practical, and thorough. It was like drinking from a fire hydrant.

I was impressed that the conference was not built around Dr. Bailey. He spoke several times. I also heard many other respected preachers speak and lecture.

Moreover, I was blessed by the multiracial line-up of speakers. I heard E.K. Bailey, Al Louis Patterson, Jasper Williams, and Myles Jones. But I also heard Warren Wiersbe and Stephen Olford. It was incredible! 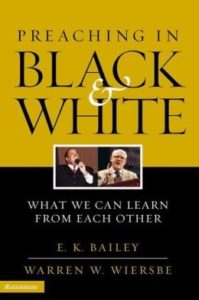 You should read Preaching in Black & White by E.K. Bailey and Warren W. Wiersbe.

During a dinner conversation, a white Christian friend remarked that Dr. E.V. Hill had done more to bridge the gap between white and black Evangelicals in the last 30 years.

I agreed and disagreed. Dr. Hill introduced many white Evangelicals to black church preaching. But Dr. Bailey introduced many African-Americans to a more biblical method of preaching that crossed racial lines.

Though I heard Dr. Bailey in person many times, I really did not know him that well. He was kind to me, because I was a son in the ministry to his longtime friend, Melvin V. Wade Sr. But toward the end of life, he began to reach out to me and went out of his way to encourage me. It meant the world to me.

One of the last times I heard Bailey preach, I cried. He was only giving his opening remarks! I was grateful for the impact he had on my ministry.

I have been influenced my many white expositors. At the same time, I always pray that God would raise up model African-American expositors.

Dr. Bailey was an answer to that prayer!

Even though he is now a blessed memory, Bailey continues to influence preachers – young and old, black and white – to be committed to biblical preaching. The Concord Church continues to grow. And the E.K. Bailey conference is still going strong, under the leadership of Pastor Bryan Carter and the Concord team.

Likewise, the Lord is using Dr. Shelia Bailey around the country to disciple women. Her S.T.A.N.D. Conference, which meets at the same time as the Bailey Conference, is also having a great and positive impact.