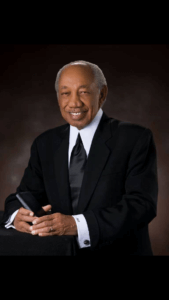 I heard Dr. A. Louis Patterson Jr. preach for the first time in the late-night service at the National Baptist Convention in Los Angeles in 1990. These services are typically when the major whoopers preach. But Dr. Patterson simply stood and explained the story of the woman with the issue of blood and sat down. It left a deep impression on me.

I later visited a church and stopped by their tape booth after the service. There was a tape by A. Louis Patterson. I bought it and listened to it. From that moment, Dr. Patterson became my mentor from afar.

I was content to be his anonymous pupil – that way I could more easily steal his sermons! But upon meeting him, he warmly embraced me. My father had been a blessing to Dr. Patterson. And he determined to be a blessing to me. (My real name is Mephibosheth.) But I am not special in this regard. Dr. Patterson was an encourager. He was always lifting others up.

His sermons were ruggedly biblical yet crystal clear and immensely practical. To listen to was like standing under a refreshing waterfall of biblical wisdom. Beyond the faithful and clear content of his sermons, Dr. Patterson’s presentation of the word was unique. His obvious mastery of his material, without a manuscript before him, helped lead me to note-free preaching. He was a wordsmith who could turn the ear into the eye. His winsome personality shined in the pulpit. And all of this was bathed in true reverence, spiritual passion, and pulpit gravitas.

Dr. A. Louis Patterson was a man of God in every sense of the term.

Dr. Patterson became my hero as I heard him preach in revivals, conferences, and conventions over the years. But my respect for him grew exponentially when I met Pastor Patterson.

I thought I had arrived when churches began to send a car service to pick me up from the airport. But the first time I preached for Dr. Patterson, he picked me up. And he personally cared for me the entire trip.

There are many great preachers who don’t seem to have a heart for the pastorate. But you have not seen Dr. Patterson at his best if you have not seen him loving lead the Mt. Corinth Missionary Baptist Church of Houston, where he served for more than 40 years. It is truly a church that is Bible-regulated, Christ-centered, and prayer-minded.

Over lunch, Dr. Patterson told me about his weekly preaching and teaching schedule at Mt. Corinth. I couldn’t believe he wrote the Sunday School lesson each week. So I went home and declared I was going to write our lessons. The work almost killed me! I wasn’t that crazy, however. I wrote lessons long enough that it would take the teachers two weeks to get through them.

I invited Dr. Patterson to preach my pastoral anniversary celebration in Los Angeles. And he graciously consented. In 18 years of leading that congregation, I was never more honored to have a man stand in my pulpit. We wrote the largest check our check had ever wrote for a guest preacher. But Dr. Patterson refused to accept it!

As I was praying about transitioning to Jacksonville, I consulted Dr. Patterson for advice. I gave him all of my objections to moving. In typically Patterson fashion, he responded with biblical principles.In that conversation, Dr. Patterson told me he believed God’s blessings would be on my ministry if I stayed in Los Angeles or moved to Jacksonville. I can’t describe what that vote of confidence meant to me.

We have a series of guest speakers in February each year at the Shiloh Church. And I was determined to have Dr. Patterson. Again, he graciously consented. Then I received the even greater news that Sister Patterson would accompany him.

When Dr. Patterson arrived to Jacksonville, he did not have much time before the service. Yet he permitted me to interview him for my blog site. Then he stood full of energy and preached the word. In my years in Jacksonville, I have not been more honored to have a man stand in my pulpit.

It was not until his sermon that it dawned on me that it was the anniversary of the death of his son, my friend, A. Louis Patterson III.

After the service, I told Dr. Patterson about a little book on preaching I wrote. I nervously asked him to endorse it. And, once more, he graciously consented. We printed him a draft to read on his way home. He sent back the following endorsement:

From teen preaching to preeminent pulpiteer, Dr. H.B. Charles, Jr. has again demonstrated through pen and paper what he so effectively and efficiently does through his pulpit proclamation, resulting from his prior preparation. Acts 1:11: “All that Jesus began to do (example) and teach (explanation).” Read this book On Preaching and practice it with great profit.

A little more than a month later, Dr. Patterson quietly made his transition from earth to heaven, faith to sight, labor to refreshment.

Click here for more information about the life and ministry of Dr. A. Louis Patterson Jr.