Reflections On My First T4G Conference 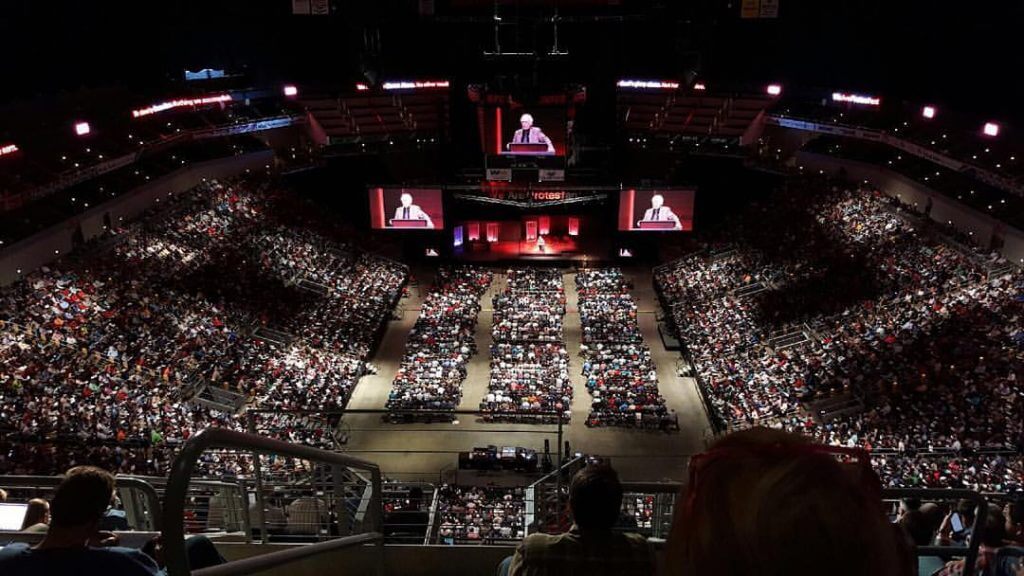 I attended the Together for the Gospel Conference in Louisville for the first time last week. It is a biennial conference for pastors led by Mark Dever, Albert Mohler, Ligon Duncan, and C.J. Mahaney.

I have heard about T4G from its inception. I have seen the videos from past meetings. I have purchased the books produced from the messages. I have heard good reports from friends who have attended. But schedule conflicts have prevented me from attending, until this year. I unspeakably grateful that I was able to attend this year.

My week began Monday by participating in the Council of Biblical Manhood and Womanhood pre-conference. I receive a lot of invitations to partner with various churches, schools, and ministries. But CBMW is the only thing I have asked to partner in. I believe the work of CBMW is vital. It was a joy to speak on the spiritual power of a godly man. And I look forward to serving with them in the future.

T4G began Tuesday afternoon. As I stood in line to get into the KFC Yum! Center, you could feel the sense of anticipation. The event itself was everything I hoped it would be. The following are several specific reflections on my first T4G.

The conference was executed with a sense of excellence. Having participated in many conferences, I know events are often pulled off without anyone noticing behind-the-scenes chaos. If this was the case at T4G, the chaos was well hidden. It seemed every detail was carefully thought through and the program flowed well. The helpful volunteers, tribute videos, and abundant resources were just as much a part of the event as what happened on the stage. Yet it was carried out without a focus on itself. There are times when the quest for excellence consumes an event, rather than facilitating the event. Not so with T4G. Even the requisite sponsor acknowledgements were done in a way that emphasized partnership in the gospel, rather than feeling like commercials. The experience was refreshing. 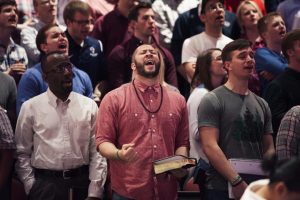 It may be strange to point to singing as the highlight of a pastors’ conference. But I’m sure this would be the consensus of the T4G attendees. As we entered the Yum! Center on the first day of the conference, everyone was given a hymnal – Hymns of Grace published by the Grace Community Church where John MacArthur is the pastor-teacher. Every song we sung during T4G was from this hymnal.

We sang corporately. There was no band, praise team, or choir. There was a grand piano on stage Bob Kauflin played as he lead us in singing old and new hymns. It was overwhelming to sing my favorite song – It is Well With My Soul – with 10,000 other Christians! I also fell in love with the hymn He Will Hold Me Fast during the conference.

As a pastor who is most often the assigned preacher in corporate worship, it was a joy to sit under the ministry of the word during T4G. I am grateful for every opportunity I get to hear Dever, Mohler, Duncan, and Mahaney speak. It was especially moving to hear John Piper and John MacArthur, men whose ministries have so shaped my theology. I was blessed to also hear talks from Kevin DeYoung, Matt Chandler, Thabiti Anyabwile, and David Platt.

The T4G talks focused on the major doctrines of the 16th-century Protestant Reformation, as next year will mark 500 years since Martin Luther nailed his 95 theses to the door of the Wittenberg Church. Each speaker gave a strong message. I was challenged by Mark Dever’s talk on pastoral ministry. I think John Piper gave one of the clearest explanations of the bondage of the will I have ever heard. And I found Kevin DeYoung’s message of sanctification very helpful.

NOTE: Videos of each talk will posted soon at the T4G website.

The highest of the conference for me was the panel that included Dever, Mohler, Duncan, and Mahaney. T4G is rooted in and grew out of the friendship of these four men. And to see that dynamic played out on stage was amazing. The panel discussion was a conversation among friends that just happened to be in front of 10,000 other people. This conversation convicted me that I need to be more intentional about developing Christian friendships that are together for the gospel. As Al Mohler closed the conference, he made a statement that has stuck with me: “We need Christ to hold us fast. We also need Christian friends to hold us close.”

[Tweet “We need Christ to hold us fast. We also need gospel friends to hold us close. – R. Albert Mohler”]

It was good to meet and fellowship with other gospel-driven pastors at T4G. I am grateful for the new friendships established. And I was glad to share this experience with two brothers from the church I serve. Our conversations between and after services made the experience even more meaningful.

I do not know if I have been a better conference than T4G. But I was disappointed that there was not more racial diversity in the attendance. Specifically, more African-American brothers. If there were 10,000 people at T4G, my guess would be that there were only 100 or so African-Americans. I am not sure why that is. And I do not how to compare that number to T4G numbers. I do not mention this as a judgment on the conference, one way or another. But I constantly found myself noting that absence of black Christians and wishing that more were there. 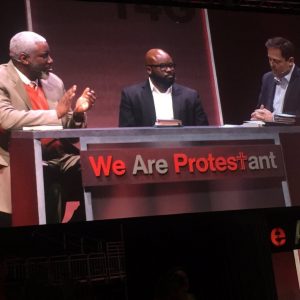 I had the privilege of participating on a panel to discuss Thabiti Anyabwile’s new book, Reviving the Black Church. I have read the book. And I agree with the biblical solutions to church problems he prescribes. How could I not. But much of analysis of black church life is not consistent with my spiritual upbringing, personal experience, and pastoral observations. Admittedly, I was very nervous talking about these things in front of 10,000 predominantly white Christians, who received Thabiti’s book for free. (It was one of 15 free resources given away at T4G. Way cool!)

I hope the panel discussion was helpful. And I pray that at the next T4G, God willing, there will be a greater representation of different races bound together by the gospel.