Play Where the Coach Puts You!

I had traveled all day without eating. I had to get a bite before I turned in.

We ended up at a restaurant with a group of other pastors. To my surprise, one of my preaching heroes was there. And I had the opportunity to chat him up over dinner.

Wanting to impress my hero, I began to tell him how wiped out I was. After all, it was my third week of preaching in three different cities.

He was on his seventh full week of preaching in seven different cities. (So much for trading war stories with him.)

How in the world are you able to preach seven weeks in a row? I asked. 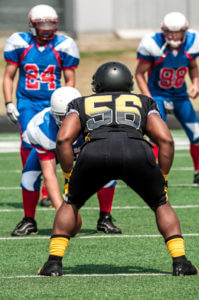 He responded by telling me a story about being on the football team in high school. He knew that he should be the starting running back for the team. But the coach had other ideas and put him on defense.

He played defense determined to get to the other side of the ball. But how?

He came up with an ingenious plan. Or so he thought. He started blowing plays, expecting the coach to see how lousy he was on defense and switch him to the offense.

His plan succeeded. Sort of.

The coach did notice his bad play and pulled him out of the game. But the coach did not move him to offense. He benched him. And the wanna-be running back didn’t get to play at all.

“I learned an important lesson,” the older, wiser preacher concluded. “If you don’t want to ride the bench, you better just play where the coach puts you.”

This principle is infinitely more important in ministry than it is in sports.

There are many times we are tempted to feel we have been given the wrong ministry assignment. We want to be somewhere else. And we nurse that feeling until we think we should be somewhere else. Some place bigger and better. Somewhere more prominent. Anywhere else.

We act like we know what’s better for the team than the Coach.

In the process, we forget that it is a privilege just to be in the game. None of us are on the team because we were first-round draft picks the Lord couldn’t afford to pass up. We don’t deserve to be on the team, much less in the game!

Whatever you do, don’t neglect your present assignment.

Trust the Coach. Remember he wrote the playbook and devised the game plan. He will move you when he determines it is time.

In the meantime, play your assigned position. Give it your best. Be faithful. Cheer on your teammates, including – no, especially – those who are in a position you would love to have. And be thankful that the Coach has called your number at all!

If you don’t want to get benched, just play where the coach puts you.

What do you do to remain faithful in a difficult assignment? Join the conversation in the comments section.

Things I’ve Learned Along the Way

The Bottom Line of Christian Ministry

Is It Really Worth It?