He Can Make the Difference! 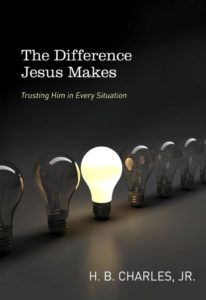 The following is an exert from the introduction of my new book, The Difference Jesus Makes.

I was in junior high school the first time a girl gave me her phone number. I did not ask for the number. As our families had dinner together that Sunday evening, it was obvious that I liked her. But I did not have the guts to ask for her number. I didn’t even know that was what you were supposed to do. But she saved the day. Before we left the restraint, the young lady told me she needed a pen. I borrowed one from somebody and gave it to her. She then wrote her number on a piece of paper, folded it, and handed it to me.

“Call me sometime,” she said.

I was so blown away by what just happened, I didn’t respond. But I had every intention of calling her. There was more important business, however, for me to tend to first.

I was the preacher’s kid. And there was nothing “cool” about me back then (or now, for that matter). I hung out with the two most popular boys in school. But I was only popular, because I hung out with Billy and Michael. We made an unbeatable team for three-on-three games at lunch. They were able to capitalize on our schoolyard “fame.” The girls loved Billy and Michael. I, on the other hand, made the girls nervous when I came around. But I now had chips to get into the big game. I finally had a girl’s phone number.

I didn’t have a sense of fashion back then (or now, for that matter). It was clean and did not itch, that’s what I put on. But that Sunday night, I laid out my clothes. I ironed my pants and shirt. And when everything was in place, I placed the folded paper with the girl’s number in my back pocket.

The next day, at just the right time, I reached into my pocket and pulled out the number. “What’s this?” I asked. “Oh, yeah. This is that’s girl’s phone number. I forget I had it.”

You would have thought I just did a mesmerizing magic trick. The guys all gathered around and began to ooh and aah. They asked my questions about the girl. They asked me when did I got the number. They had all kinds of questions. And I joyfully answered them all. It was great, so great that I couldn’t let this be a one-time show. But I knew I would not be getting another girl’s number any time soon. So I had to milk this situation for all it was worth. I kept the number in my pocket for days. And every time I had a new audience, I would go through my routine. It wowed the crowd every time.

Eventually, the multiple shows took its toll on my key prop. The folded piece of paper ripped. But I refused to let that end my performance. I simply got another piece of paper and wrote the girl’s number on it. And the show continued. But it was just a show. I impressed all the guys in school with a number that I never used. The pretty young lady who gave it to me was a year older than me. But my father said she was too “mature” for me. So he did not allow me to talk to her. In fact, I was not allowed to talk to any girls on the phone at the time. Dad said I wasn’t ready. I had been strutting around the schoolyard for days bragging about a number from a person I had no relationship with.

I can look back at my boyhood shenanigans and laugh. But that experience also troubles me. I don’t want that to be my experience with Jesus.

The Lord Jesus Christ has reached out to us in His incarnation, taking on flesh and becoming one of us. And he has given us His “number,” if you will. He has given us the word of God by which we can know him better. Many of us carry it around with us. We bring it up in conversation to impress others. But we do not have a real, life-changing relationship with Jesus. Is that you? Are you professing something you do not possess? Have you experienced the difference Jesus makes?

Click here to get a copy of The Difference Jesus Makes.