HBC3 Is In Double Digits

Yesterday was my son’s – H.B. Charles III – tenth birthday. Or, as he put it, he is now in “double digits.” I remember the day of his birth as if it was yesterday. I was on an overnight trip to Atlanta when he was born – almost two months premature.

He had a slow start. But God has been faithful. And I am grateful that he is healthy and strong today. I am praise the Lord for how I have watched his personality develop over the past year, since we have been in Florida.

When I was considering the possibility of relocating from Los Angeles to Jacksonville, I was very concerned about how a move would affect my wife and children. By the Lord’s grace, my family has adjusted to our new home well. In fact, they have all adjusted faster and better than I have.

Several weeks ago, I was in Los Angeles. And as told family and friends about how H.B. was doing, they wondered if I was talking about they same little boy that they knew.

H.B. was in a shell, always nervous about being around people – even people he has known all of his life. But since he has been in Jacksonville, by God’s gracious providence, his personality has opened and developed. It is a wonderful thing to see.

Now in the fourth grade, H.B also seems to like school more than he did in the past. It was always a struggle to get him to pay attention in class. And that would be a major discipline issue for him. But those reports of restlessness in class as far more infrequent. And he is learning to enjoy reading. That’s by boy!!!

“3,” as Crystal and I occasionally call him, is a part of the media ministry at Shiloh. I am not exactly sure what he does back there. But he takes it very serious. And, ironically, he is much more attentive about worship and the word now that he has been helping the media team. Praise God! 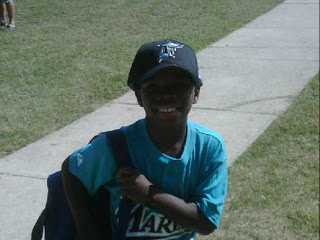 Last weekend, H.B. had his first little league baseball game. Crystal and the girls were at the women’s conference, so it was just me and him. He was really excited that it was just the boys.

He played left field. His first at bat, he struck out. In the next inning, he pinch ran and scored a run. In his second at bat, he hit a ground ball to the short stop but almost made it to first safely. In the final inning, H.B. hit a ball to center field, with two outs. He later stole home and tied the game for his team. Afterward, he was awarded the “game ball.” I don’t know who was more excited – him or me. He is also playing flag football. And In his first game, he scored his team’s only touchdown. (Can you tell that I have become one of the dad’s overnight?)

I thank God for my son. I praise the Lord for his ongoing growth and development. And I continue to pray that he would grow as Jesus grew – in wisdom and stature and favor with God and man (Luke 2:52).