Have You Been With Jesus? 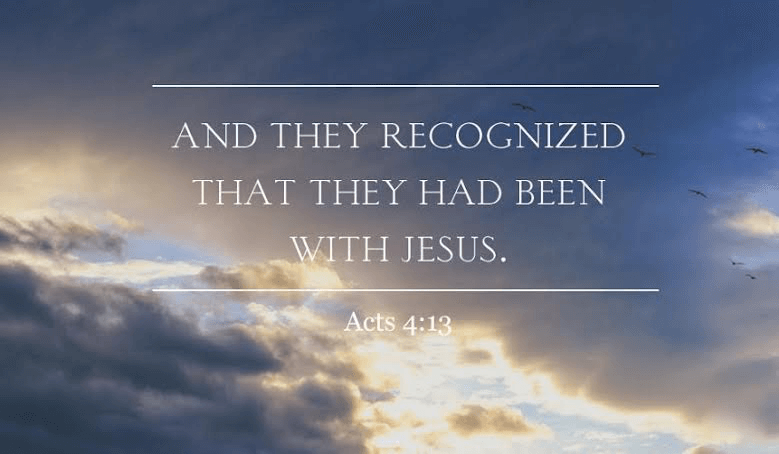 As he listed the speakers he heard, I asked about a particular name. I knew of this man’s ministry but had never heard him speak.  I inquired, “Can he preach?”

My friend answered affirmatively and emphatically. “He knows how to handle the text,” my friend expanded. “And you can tell he’s been with Jesus.”

The conversation ended there, because I did not say anything else. I could not. I was stuck on the statement, “And you can tell he’s been with Jesus.”

The statement itself was not new to me. I recognized the biblical reference.

Peter and John were arrested, because of their witness for Christ. And they did not waver in the Christian witness, as they stood trial before the Jewish rulers, elders and scribes in Jerusalem. Almost parenthetically, Luke notes…

“Now when they saw the boldness of Peter and John, and perceived that they were uneducated common men, they were astonished. And they recognized that they had been with Jesus.” (Acts 4:13)

The apostles did not have formal education, institutional clout, of ministerial prominence. But it was obvious that these men had been with Jesus. The religious leaders were not complimenting the Christlikeness of the apostles. It was just a plain statement of fact, even though these religious leaders did not know the magnitude of what they said. The words and deeds of the apostles made it obvious that these men had spent time with Jesus of Nazareth.

This is a great way to describe a preacher of the gospel. He has been with Jesus. Unfortunately, until my friends passing statement, I had never heard a preacher’s pulpit ministry described that way.

After scanning my mental files for a moment, I double-clicked on my own ministry. Could this be said of me? When I stand to preach, is it obvious to those who hear me that I have been with Jesus.

I take pride in the fact that I do not go to the pulpit unprepared. I labor in study to be faithful to the God-intended meaning of the text. I struggle in sermon preparation to be clear in my presentation. I saturate my heart and mind with the biblical truth to preach with passion. But the truth is that you can be faithful, clear, and passionate in the pulpit, without ever giving the sense that you have been with Jesus.

[Tweet “Ministry is about fulfilling a calling, not practicing a vocation.”]

Ministry is about fulfilling a calling, not practicing a vocation. We are not professionals, who happen to do our work in a religious context. We are servants of the Lord Jesus Christ. Every aspect of our life and work should submit to the lordship of Jesus Christ. And our submission to Christ should be evident to others by what we do in ministry, and how we do it.

When a soldier was court-marshalled for sleeping at his post, he claimed he was praying. With mockery, he was asked to pray during his trial. When he finished, the chargers were dropped. It was concluded that he had to spend extended time in private prayer to pray publicly like that in a crisis.

What does a pastor who has been with Jesus look like?

He has clean hands of unreproachable integrity. He has steady feet that walk in obedience. He has dirty knees from time spent in believing prayer. He has weary eyes from diligent study. He has a renewed mind of biblical conviction. He has a broken heart for lost people. He has a listening ear for spiritual direction. He has strong arms from bearing one another’s burdens. He has a faithful tongue that speaks the truth in love. He has firm legs that stand strong in spiritual boldness.

Sure, you know how to handle to text. But can people tell that you have been with Jesus?