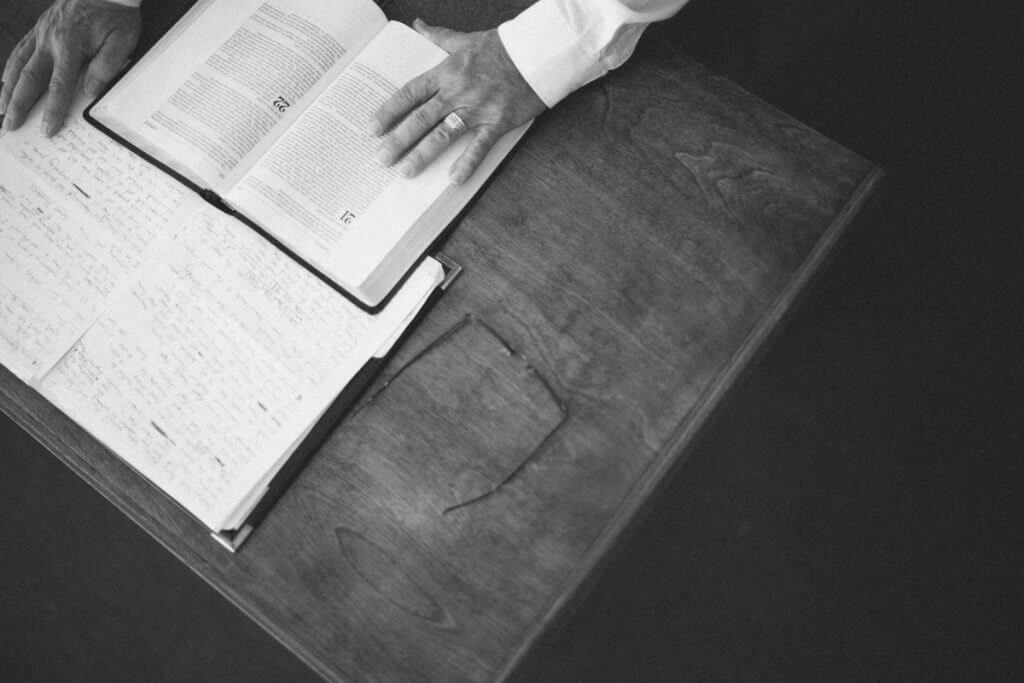 Some preachers take off strong. They get to cruising altitude and pilot the sermon without turbulence. Then they land smoothly at the same airport from which they took off. It was good flight. Homiletical policies and procedures were followed. And the congregation enjoyed the ride so much that it never noticed they did not actually go anywhere. These craft-first preachers are lauded as great communicators. But they fail to preach the word, to the detriment of the crowds that sit under their preaching.

Other preachers focus on the God-intended meaning of the text. The process is saturated in prayer for illumination. The meaning and grammar of the words are carefully studied. The literary and historical context is considered. Cross-references are looked up. The best commentaries are reviewed. The doctrinal themes and theological significance of the passage are unearthed. The preacher does his best to rightly divide the word of truth. But there is a heavy fog in the pulpit, because diligent research was not fleshed out in sermon preparation. Careful study became sloppy preaching.

Expositional preaching gets a bad rap for being dry, boring, and lifeless. But zombie preachers should be indicted, not expository preaching. The problem with some expository preaching is that it is exposition but it is not preaching. It is obvious the preacher knows a lot about the text. But the divine message of the text is not preached. Or the various elements of the sermon fail to make the biblical message clear.

When the craft of the sermon overrides the message of the text, it is performance not preaching. But the burden for truth that drives the expositor to study hard should also drive him to prepare well. The ancient herald was under orders to proclaim the message of the king. This all-consuming duty shaped the herald’s message and the presentation of that message.

This is the expositor’s charge. True expository preaching strives to be faithful to the text and clear in the presentation. It is for this reason that introductions, illustrations, and conclusions should matter to the expositor. It is not about being creative, eloquent, or impressive in the pulpit. It is about preaching the word faithfully and clearly to the glory of God and for the salvation and sanctification of the hearers.

Christ-exalting preaching is text driven. It is also clearly communicated. Faithful preachers do not impose their own ideas on the text. They also do not ramble through their introduction, manipulate in their illustrations, or crash-land during their conclusions.

I typically begin my sermons with a word of prayer. I pray publicly to express dependence on God to help us speak faithfully and hear clearly. Then I read the sermon text without comment. I will have the rest of the sermon to explain and exhort. I believe it affirms the authority of scripture to begin the sermon by simply reading the text. After praying and reading the text, I state the title of the sermon. The goal is that the title will be an encapsulated preview of the message. Then I proceed to the formal introduction of the sermon.

Sermon introductions should be brief. Too often preachers spend a major chunk of their allotted time in the introduction. It seems they are sticking all the material they could not find another place for into the introduction. Then they say at some point, “I wish I had time to deal with this.” You did. But you spent it in the introduction. Don’t spend too much time setting up the text. Get to the text and trust it to do the work in the minds and hearts of the congregation. The introduction should point toward where the sermon is headed. But the goal of the travel agent is not to captivate with descriptions of exotic locations. It is to get the traveler on a plane to that destination.

The introduction should set the text in its proper context. A text without a context is a pretext. Expository preaching seeks to explain what they text means by what it says. Context is essential to understanding what the text says and means. The three rules of real estate are location, location, location. The three rules of Bible exposition are context, context, context.

The introduction should sketch the big picture of the text. Likewise, the introduction should state the main point of the sermon. You don’t have to prove, defend, or apply that point yet. Tell them where you are going in the introduction and then take them there in the body of the exposition. Presenting the literary and historical context roots the text in the world of the text. Stating the point of the sermon in a clear, present tense, active sentence roots the text in the world of the congregation. The expository sermon then becomes a bridge between the text and the congregation that connects them to the truth of God’s word.

Sermon Illustrations are like windows on a house. They help the listeners see the point and how it lives in the world beyond the sermon. This is one of the key lessons we can learn from the preaching of the Jesus in the Gospels. The preaching of Jesus was sound, faithful, and profound. It was also filled with illustrations, word pictures, and parables. Many times Jesus preached remarkable sermons by telling simple stories. Jesus exemplified the power of illustration in preaching.

Normal people do not build houses with no windows. They also do not build houses with only windows. Similarly, you must not allow illustrations to dominate the text of the sermon. Keep them short. Don’t use too many of them. Select them carefully. Practice integrity with the facts. Avoid manipulating emotions. Be careful of “indecent exposure” in the pulpit. Guard family and counseling confidentialities. Don’t be the star of your own stories. Make sure the illustration speaks for itself. Comedians say if you have to explain the joke, it bombed. So it is with illustrations. Sermon illustrations make the exposition clear. You should not have to do an exposition of the illustration. Illustrations are servants of the text. If you have to choose between the text and the illustration, always side with the text!

One way to keep illustrations in their place is to make sure the illustrations actually illustrate. Do not tell a story just to tell it. It may be humorous, memorable, or compelling. But you are not a pulpit storyteller. You are a Christian preacher. Any illustration you use should be to shed light on the text. It should illustrate the exposition of the text and exhort the hearers to be doers of the word.

A sermon should be a self-contained unit, consisting of an introduction, main body, and conclusion. There are exceptions. But exceptions are not the norm. Very few preachers are skilled to preach one sermon over three or four weeks. From week to week, the sermon should formally begin and decisively conclude. My advice to pastors is to preach series through books of the Bible. I reject the notion that pastors must keep series under six weeks to keep the congregation’s attention. I acknowledge that we live in a mobile generation with a short attention span. This is no reason to abandon consecutive exposition. But as we preach extended series, each sermon should stand on its own. For this reason, the sermon conclusion is just as important as the sermon introduction.

The conclusion of the sermon is not the introduction. This is not a time to introduce new material. The exposition of the text should be done in the body of the sermon. Do not use the end of the sermon to stick in everything you did not get to say yet. The conclusion is the time to review where you have been, not a last chance to get in a few more sermon nuggets. All that has been preached should be brought to bear on the hearer in the conclusion as a call to action. To hear the word without doing what it says is self-deception (James 1:22). The wise man builds his house on the rock by doing what the Lord commands (Matthew 7:24-27). The conclusion should issue the sermon’s final challenge to observe all that Christ commands (Matthew 28:20).

There are two groups in the audience who need this final challenge. As pastors-teachers, we regularly preach to professing believers. The pastor who is committed to expository preaching must think about the sermon in practical terms, not just exegetically, theologically, or homiletically. What we preach on Sunday should equip our people to follow Jesus where they live on Monday.

Yet we must not assume that professing believers are true Christians (Matthew 7:21-23). There will many in our pews who walk in a false presumption of salvation. This Sunday-morning mission field should burden us to conclude by calling unbelievers – be they professing Christians or conscious unbelievers – to repent of their sins and call on the Lord for salvation. Point the congregation to the Lord Jesus Christ in the conclusion. Finish strong by calling your hearers to trust and obey Christ. “Him we preach,” declares the Apostle Paul, “warning everyone and teaching everyone with all wisdom, that we may present everyone mature in Christ” (Colossians 1:28).