A Personal Testimony Tucked into a Biblical Commentary 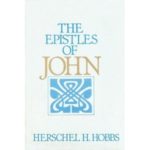 I am preaching through the Epistle of 1 John.

In the footnotes of a commentary, I recently found out that Herschel Hobbs wrote a commentary on the Epistles of John. It arrived in the mail several weeks ago.

As I was studying 1 John 3:4-10, I ran into an interesting paragraph. It really had nothing to do with anything. It seems that a grammatical point caused Hobbs to reminisce about his Greek professor, A.T. Robertson, author of the popular Word Pictures in the New Testament.

Despite the fact that he was one of the leading Greek scholars of his time, A.T. Robertson repeatedly refused to make a translation of the New Testament. He reasoned that it is impossible to do so without losing something in the translation. He finally relented, but died unexpectedly before he could complete his work. I was in his class when he had the stroke which took his life an hour and a half later. An enterprising student took pictures of some of the last thing he did, such as Greek words written on the blackboard. One picture was of his desk. Right in the middle of his desk lay his green eyeshade on the pages of this not-to-be finished translation. – Herschel H. Hobbs, The Epistles of John, p. 83